US government bonds and technology stock futures sold off sharply after a Democrat win in a key Senate race raised prospects of higher corporate taxes and a bigger fiscal stimulus that could feed through to inflation.

The sell-off pushed the yield on the 10-year US Treasury bonds up 0.05 percentage points to just above 1 per cent, its highest level since the market turmoil of last March.

Contracts that wager on the future direction of the benchmark S&P 500 index fell 0.7 per cent, while those on the top 100 stocks in the technology-focused Nasdaq dropped 1.9 per cent. Tech stocks have particularly benefited from the low-rate environment, while the Democrats have promised tougher antitrust rules on the sector.

“The market is taking a view that we will see more stimulus and this will have to be paid for,” said Stefan Keller, asset allocation specialist at investment house Candriam. “The fear is of higher taxes on the most successful companies of 2020, which are the tech giants.”

In a crucial Senate race in Georgia, the Associated Press declared a win for Democratic challenger Raphael Warnock, while his fellow Democrat Jon Ossoff clung to a narrow lead. A Democrat victory in both run-offs would result in a 50-50 split of the upper house with vice-president elect Kamala Harris able to break the tie in significant votes such as Budget resolutions.

President-elect Biden, meanwhile, pledged on the campaign trail to raise corporate taxes from 21 per cent to 28 per cent and singled out tech firms such as Amazon for using tax loopholes.

European stock markets drifted on Wednesday, with the benchmark Stoxx 600 edging up 0.2 per cent. The prospect of a stronger recovery in the world’s largest economy lifted a gauge of European bank shares by 1.5 per cent while oil and gas shares gained 2.4 per cent. London’s FTSE 100, which has a heavy weighting of bank and energy stocks, rose 0.8 per cent.

Biden’s policy proposals, including corporate tax hikes and fiscal stimulus, are by no means certain to be enacted

At publication time, the race between Democrat Jon Ossoff and incumbent Republican David Perdue remained still close to call, with US media reporting about 97 per cent of the vote counted.

But most of the remaining ballots to be tallied were in heavily populated, Democratic-leaning counties around the city of Atlanta. The New York Times forecast a more than 95 per cent chance of victory for Mr Ossoff.

“Democrats controlling both houses would mean that they could pass through larger fiscal packages, but with filibuster rules, co-operation is still necessary,” said Sebastien Galy, senior macro strategist at Nordea Asset Management. “Such [a] boost to the economy is . . . the logical move to avoid an economy being stuck in a low-growth environment quite quickly.”

While some investors fear a Democratic sweep could also lead to higher taxes — which could hit American companies’ earnings — others were more sanguine on the prospects for US equities.

“We would note that prior to election day on November 3, markets were expecting Democrats to sweep, and this did not prevent equity markets from rallying,” said Mark Haefele, chief investment officer at UBS Global Wealth Management. 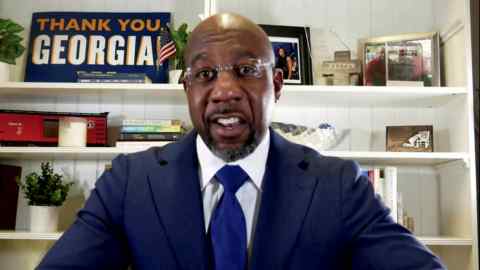 Mr Haefele added that moderate Democrats in the Senate could also hold back against some of Mr Biden’s policies, with some wary of pushing too aggressively on fiscal measures ahead of midterm elections in 2022.

“Even if Democrats win the run-off elections, Biden’s policy proposals, including corporate tax hikes and fiscal stimulus, are by no means certain to be enacted,” he said.

In Asia, Japan’s Topix stock index was up 0.3 per cent while Australia’s S&P/ASX 200 benchmark fell 1.1 per cent. China’s CSI 300 of Shanghai- and Shenzhen-listed shares, which on Tuesday hit its highest level since the 2008 financial crisis, was up 0.9 per cent, while Hong Kong’s Hang Seng index rose 0.3 per cent.

Video: Will tech stocks end their bull run in 2021? | Charts that Count